Goodwill Central Texas (GCT) was established in 1958 to create jobs for people with disabilities serving Austin, Texas and the surrounding area. The organization started with a single retail store employing and serving 69 people and has grown into the region’s nineteenth largest employer with 31 retail stores, a commercial services division, a staffing group, and an operating budget of over $70 million. GCT has expanded its mission to serve all those in the community who need extra support to find a job and become financially stable, including people who are lacking education, those who are homeless, and people with a criminal history. In 1998, Jerry Davis became the CEO of Goodwill Central Texas, and the organization’s operating budget has increased six-fold during his tenure. This growth is the result of a number of important factors, including:

A mature income-generating engine providing strategic flexibility. GCT is able to leverage unrestricted revenue from its retail business and staffing services to provide funding for new projects. The goal is to reserve five to eight percent of its operating budget each year for this purpose.

Alignment between operational goals and organizational mission. GCT’s mission is closely aligned with its operations. A large proportion of its revenue comes from the retail and staffing business, which provides GCT with the flexibility to pursue its own goals rather than those of outside grant funders.

Sophisticated performance measurement and management tools. GCT has a sophisticated system and process for tracking its outcomes and measuring its strategic goals. The culture encourages transparency and fosters an honest assessment of successes and failures in order to improve efficiency. 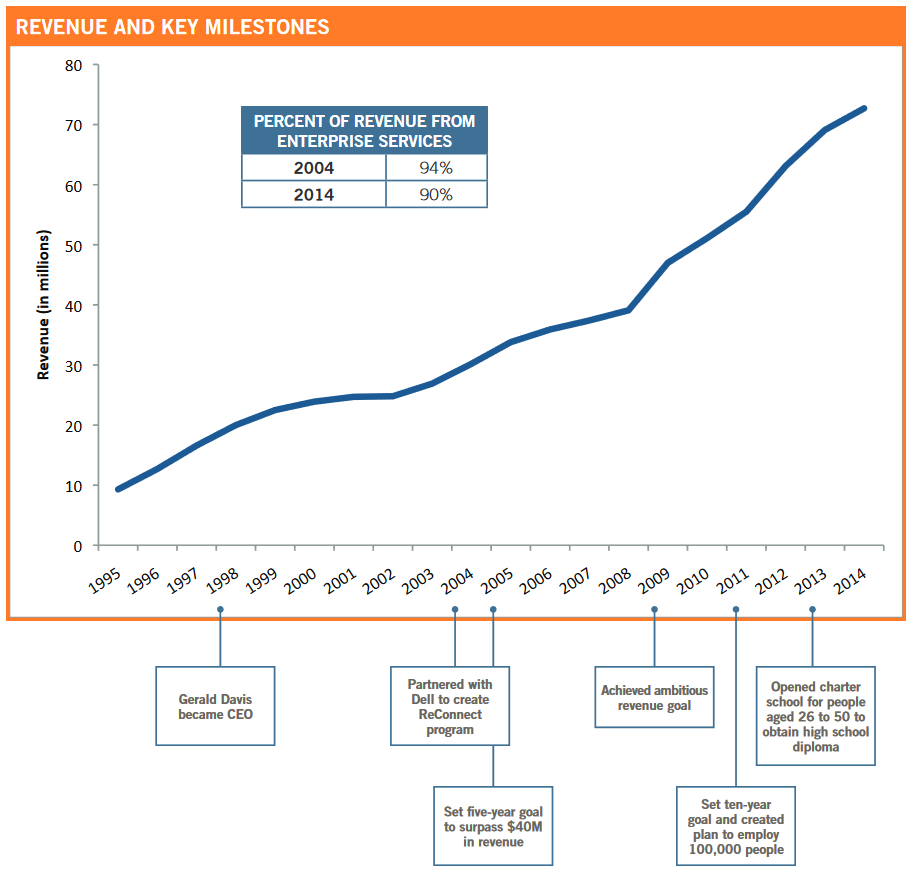 Initially established to serve people with disabilities, GCT has expanded its target population to include people lacking a high school diploma or GED, those who are homeless, and people with a criminal history. While the organization primarily focuses on helping these groups, GCT will serve anyone who comes through its doors in need of assistance and views itself as an organization working for the entire community.

GCT has a sophisticated system for measuring performance and its progress toward strategic objectives. The purpose-built Performance Excellence Division is responsible for tracking key indicators and improving data collection processes across the organization, and creates three key reports. On a monthly basis, the Services and Employment Report (SER) tracks the number of people served in each program, course completions and certifications, the number of people placed in jobs, and average wage at placement. The Balanced Scorecard, also updated monthly, tracks indicators specific to goals in the strategic plan including its financials, intakes and job placements, jobs created, recycling goals (zero waste), donations, and staffing goals. These monthly reports help GCT use a forward-thinking approach allowing employees to track how far ahead or behind they are on their annual goals and adjust monthly goals accordingly. At the end of the year, the Outcome Management Report tracks whether each division has met these annual goals. The Performance Excellence Division also measures GCT’s overall community economic impact based on the number of jobs created, people employed, wages earned, and taxes paid.

GCT is a private, nonprofit, 501(c)(3) organization established in Austin in 1958. The organization started as a small program with only one retail store serving 69 people with disabilities, but grew considerably over time and expanded its reach to serve people leaving the criminal justice system, homeless individuals, at-risk youth, and people lacking the education and training needed to find employment. Over its first 40 years, GCT’s operating budget grew to $16 million dollars, and it served 4,700 people annually. In 1998, GCT hired a new CEO, Gerald Davis, who previously served as a hospital executive with an extensive background in both medical and vocational rehabilitation. Under his direction, GCT’s rate of growth increased considerably. In a little over 15 years, annual revenue increased almost five-fold to $72 million in 2014, and the organization served over 15,000 people and placing more than 3,250 in competitive employment.

Refocusing the Organization on its Mission and Values

When Davis became CEO, he was coming into an organization with a good reputation and solid budget. However, previous leaders had taken their “foot off the pedal,” says Davis, and the organization overall had lost focus on its mission and values. In 2000, the dot-com crash had a large effect on Austin, and GCT felt the impact as well. To get the organization back on track, Davis worked to strengthen the board, reorganized existing staff, and hired new talent at the executive level so it could grow and focus on its goal of connecting people with employment.
One of Davis’ initial directives was to capitalize on the existing retail footprint. As a nonprofit in the business of collecting donations from community members, Goodwill benefits from large amounts of free merchandise for its retail stores. Beginning in 1997, the organization received donations of old computers but, because of local environmental ordinances, was unable to throw out what it could not sell. Instead, GCT decided to turn the operation into a training program. Clients would disassemble the donated computers, put them back together in working order, and sell them through a store dedicated to refurbished computers. The store brought some national attention to GCT and, in 2004, the organization partnered with Dell to create a program called ReConnect. The program has since expanded to a national partnership with Goodwill Industries International and operates in 1,900 Goodwill stores nationwide – diverting 96 million pounds of e-waste and creating 250 green jobs. Internally, GCT has expanded the program that now generates $1.5 million in sales. GCT staff provide consulting services across the country and globe to communities wanting to replicate the model.
This success created other opportunities, including an ongoing business relationship with Dell—the company’s call center is a client of GCT’s staffing services. More importantly, the success of the computer store provided GCT with the additional publicity and resources needed to open more stores and renovate existing ones. GCT invested in upgrading the architectural design so stores would become more appealing places to shop, increasing business revenue even further. As the experience with reuse and recycling were ingrained in GCT’s operations, “zero waste” strategies became an organizational goal. What GCT cannot sell in its stores, it sells on the secondary market, and recycles the rest. The organization is able to sell or recycle over 85 percent of the donations it receives.

By 2005, GCT’s operating budget was around $30 million and the executive team and board started to set even more ambitious goals. With the success of ReConnect, the organization began competing for larger grants and increased its revenue considerably—to $40 million in just a few short years (2008). In the midst of this rapid growth, however, GCT intently focused on its mission and moved from downtown Austin to a more impoverished neighborhood to be closer to the people it served.
With GCT still on this upward growth trajectory, two developments helped inform its current goal. First, Davis attended a meeting of local business owners and executives and, after he described GCT’s current impact, someone in the crowd asked him how much money it would take to solve the problem of unemployment. This question stuck with Davis, and he and his staff spent some time figuring out how many people in GCT’s catchment area met the target criteria and were unemployed. That number was 100,000 potential employees. At around the same time, GCT received results from an evaluation of its work conducted by researchers at the University of Texas. The evaluation did not paint an entirely positive picture about what happens to GCT clients after they leave the organization, as many become unemployed again and others remain employed in very low-paying jobs.
The GCT executive team approached these findings as a challenge to truly get to scale by solving the social problem that GCT is committed to addressing—unemployment among people in the region who are disabled, have a criminal history, are homeless, or lack education. As a result, GCT staff began creating a 10-year plan focused on getting all 100,000 of these people employed.

After the 10-year plan was created in 2011, GCT began to coalesce around the goal of employing 100,000 people in jobs and careers that would ultimately provide them with a living wage. It was a bold objective and would require a significant commitment of resources—an investment made possible by GCT’s mature and dependable retail stores and contract services enterprises, which together account for two thirds of GCT’s revenue. The executive team has a target of reserving three to five percent of this revenue every year to start new programs and expand or improve its businesses to employ more people. This reserve gives GCT the ability to pursue new ideas, expand businesses, or serve a population that does not fall under the confines of its grant funding. In addition, GCT has made a number of changes geared toward accomplishing its ultimate goal:

GCT’s financial strength and sustainability have increased significantly in the past few decades. Annual revenue has increased eight-fold in the last 20 years, and the organization is able to subsidize its employment and training services with business revenue, which comprises 85 percent of its total revenue. GCT directly employs close to 1,000 people, the following indicators describe its social impact for 2013:

GCT has a clear view on what getting to scale means—providing employment to 100,000 people in Central Texas —and an understanding of the tireless effort required to meet that objective. GCT is focused on a number of strategic priorities:
Davis frames an ultimate outcome served by regional partnerships, “Full employment for our target population is a good 10-year goal. We want to really try to solve something. But we know we can’t do this by ourselves.” GCT views larger community collaboration as critical to achieving its aspirations, and the organization will continue to build upon its relationships with employers, public agencies, service providers, and educational institutions.

Case study of Goodwill Central Texas, a social enterprise based in Austin, Texas focused on employing those facing the greatest barriers to employment.

A close look at a diverse group of thriving, high-performing social enterprises from around the country and the key drivers of their success.

A close look at high-performing social enterprises from around the country and the key drivers of their success.