Denver based manufacturer of handcrafted gourmet foods and handmade jewelry.

Women’s Bean Project (WBP) is an intensive, enterprise-driven transitional work program widely known for the production of handcrafted gourmet foods and jewelry. WBP was founded in 1989 by Jossy Eyre, a graduate student in social work. The organization’s transformation over the last 15 years, from origins as a small program for occupying and training women in homeless shelters into a fast-growing business, are the result of several important factors:

A rock solid, identifiable brand. “If you want to get down to one single thing that has made a difference, it is branding,” says Tamra Ryan, WBP’s current CEO. Ryan brought her marketing background to the organization in 2003 and quickly changed the logo from a pot of soup to a sprouting bean – emphasizing growth, prosperity, and change. For a nationally distributed product, branding is crucial in connecting with customers.

Prioritizing the big picture and setting bold targets for growth. Ryan brought a business mind to WBP when it was most needed. Under her leadership, the organization has rebranded, increased sales, and placed a focus on systems, infrastructure, and data. In 2013, this audacious thinking helped WBP secure Walmart as a customer.

Local funding support in times of need. Women’s Bean Project almost ceased operations in 2002, but survived thanks to several local foundations that stepped up to help. Multiyear capacity building support from Rose Community Foundation and Bonfils-Stanton Foundation helped WBP begin to build the infrastructure needed to get back on its feet.

WBP’s close call in 2002 resulted from a lack of controls and limited advance notice of budgetary problems. The episode was a tremendous catalyst for WBP, which immediately began to operate more like a business. From Ryan’s perspective, “Change is easy to implement when no one wants to stay the same.” WBP has grown at a rate of up to 40 percent annually ever since. This business approach—and a focus on branding—is expected to sustain the enterprise’s success moving forward. 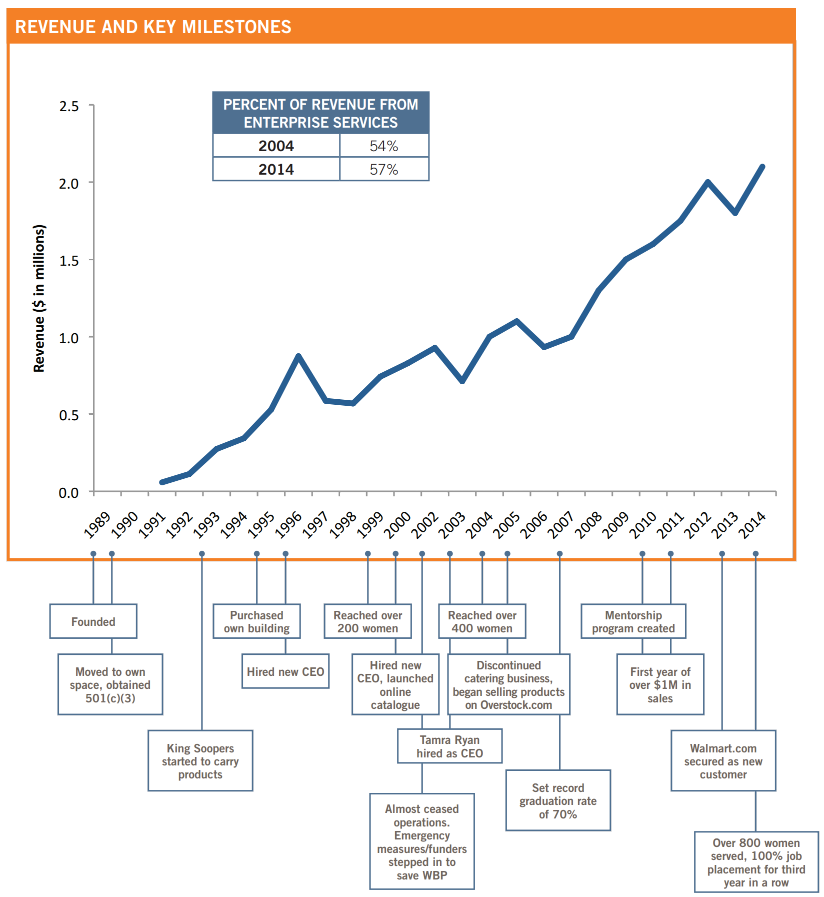 Women at WBP face multiple personal and economic barriers to self-reliance. Program participants lack marketable skills and stable work histories. Many are single mothers, have histories of public assistance, lack a high school diploma or GED, and are homeless or at risk of homelessness. Most have histories of incarceration, substance abuse, and domestic violence.

Although WBP participants spend 70 percent of their time in production roles, they also participate more broadly in the business, which provides opportunities to obtain transferable qualifications like forklift certification and computer skills. WBP products are available to consumers through a retail store at its Denver location, national Fair Trade shops, grocery stores (in Colorado and 40 other states, including the large Kroger chain), and the online retailers Amazon.com, Overstock.com and Walmart.com. In order to grow the relationship with Walmart.com, WBP became a drop-ship vendor in 2014 and enhanced its capacity to take orders and deliver goods independently, adding another avenue for business growth. At the time of this writing, WBP just finalized placing products onto SamsClub.com and anticipates growth into Walmart stores for the 2015 holiday season. Business at WBP is seasonal, with the vast majority of sales coming during the holidays, although new relationships have the potential to bring steadier streams of income.

WBP is also growing a “piecework” business, providing outsourced assembly and fulfillment for small companies as a means for hiring additional women with less investment in raw materials and sales efforts.

WBP’s program is designed to give participants holistic training in workplace competency and life skills while supporting basic needs through referrals in the community. WBP hires one large program group each year, currently about 40 women. Additional hires are made episodically throughout the year based on business needs, typically resulting in a total of 50 to 60 hires each year. The primary program accepts women in July and holds graduation in April or May. Retention rates hover around 80 percent for the nine-month program, which is comprised of four phases:

Women take life skills classes and work in production at WBP throughout all four phases. For the past three years, WBP has run a mentorship program as an integral part of its offerings. Professional women from the community volunteer to work with participants one-on-one, and take on many tasks that WBP does not have the bandwidth to provide. The mentorship program is a multi-stage process in which participants meet with volunteer mentors weekly. Mentors complete training with WBP and have four goals:

WBP was founded in 1989 by Jossy Eyre, a social work student volunteering her time at a daytime shelter for homeless women and children. Eyre knew that women at the shelter did not have jobs, and while some found employment, they always returned to the shelter. It was clear that the women did not have the skills to keep a job. Eyre invested $500 to buy beans and put two women to work in the shelter basement making soup mix, yielding $6,100 in profit. Eyre did not consider WBP a business at this point and did not have enough money to pay the women. However, she had identified a powerful tool for keeping the women occupied and teaching job skills.

From Social Justice to Social Enterprise

WBP was funded in large part by Eyre and her friends and family in the early years, and even after she departed in 1996, WBP remained more focused on social justice than business practices. This approach meant WBP might have passed on a business opportunity if it was not primarily socially oriented. And programmatically, many women came to WBP and stayed indefinitely. Rather than focusing on women with employment barriers, staff were eager to work with the “most needy,” as Ryan explains.

The focus on social justice came to a head in 2002. Without business controls in place, WBP was confronted with having insufficient funds to meet payroll. The number of staff was reduced from 10 to five, and the board and community stepped in to keep WBP operating.

Infusion of Capital and a Shifting Business Model

Several local foundations were instrumental in keeping WBP afloat in 2002 by providing grants. The Rose Community Foundation and the Bonfils-Stanton Foundation each made three-year capacity building grants that allowed for business planning and were accompanied by technical support. Tamra Ryan was brought in as CEO in 2003, and the influx of growth capital when it was most needed provided Ryan, and WBP, with breathing room to figure out how the organization would survive and thrive.

The crisis was definitive in the history of WBP for many reasons. Ryan spent her first three years tackling the challenges associated with an organization on the brink of collapse and explains the lessons learned:

It required three years for WBP to get back on track. The process included two key priorities:

With a solid brand and business model in place, WBP began to build infrastructure— implementing technology, systems, processes, and metrics to help maintain consistency. This infrastructure readied WBP for Walmart.com’s offer in 2013 to join the company’s Empowering Women Together (EWT) initiative.

In March 2013, WBP became part of the EWT initiative at Walmart.com, a corporatewide commitment to sourcing $20 billion from women-owned businesses for U.S. stores over five years. “Women’s Bean Project only needs a really small percentage of that to change the world,” says Ryan. The relationship with Walmart.com has benefited WBP in many ways:

WBP is focused on expanding its relationships with Walmart and Sam’s Club by increasing offerings in retail stores and during holiday promotions. There is huge potential for increased and more diversified sales at Walmart, as Rockers-Wright helps facilitate introductions to other parts of the company. “WBP offers great product at great prices and employment to women that helps them better themselves. This is a great partnership that is very rare in the retail market,” says Rockers-Wright.

WBP has dedicated considerable time, energy, and resources to the development of business processes and metrics in the last five years. Previously, without systems and training in place, WBP would fall into disarray every time a new participant cohort arrived, according to Ryan. WBP staff have spent the last few years documenting every aspect of the business, creating a strong program model, and implementing new data collection measures.

Key financial metrics include revenue and operating reserve growth as well as the expansion of customer and funder numbers. WBP also keeps data on program participants and outcomes, which measures retention and graduation rates, post-graduation employment, average hourly wages, and job retention at six months and one year post-graduation. Several years ago, WBP began paying graduates $50 to check in every six months. The availability of follow-up data jumped from 20 percent to 85 percent of graduates, allowing WBP to report more accurately on job retention. The data allowed WBP staff to make a number of findings, including that the best way to keep women from recidivism is a job. Social performance highlights include:

Ryan arrives at work every day with two priorities in mind: hiring more women, and the special inter-generational goal of ensuring that services are so effective and far-reaching that each woman who comes to WBP is the last one in her family to need them. Future growth is based on a vision of financial stability with consistent revenue throughout the year. To accomplish this goal, WBP has identified several important building blocks:

WBP is approached weekly by others looking to replicate the model in new locations— but believes expansion is inappropriate when the organization turns down four out of five applicants in Denver. A mentor involved with WBP for six years expressed a similar sentiment, describing WBP’s challenges as seasonality, recruitment, and workflow, and aspires to bring in participants year-round and have a consistent outflow of product. She sees expansion in Denver as inevitable in the next five years, either to a second or entirely new location given current capacity constraints.

Both staff and board members understand that the future of WBP is explicitly tied to larger economic trends in Denver. WBP has become part of Denver’s identity, particularly in the underserved but gentrifying neighborhood in which it is located. As the neighborhood changes, the population of women who need WBP will no longer be able to live nearby. Unemployment rates in Denver also play a big role in recruitment. Between these challenges and a changing population, the board has been faced with new questions and is working to ensure the organization is well-positioned to tackle them, including by building up financial reserves to manage economic cycles.

Ryan’s mantra is to approach social enterprises from a “place of abundance.” “Let’s talk about what we know how to do and can do, and worry about the problems it’s going to create later,” she argues. “Ultimately, we need to pursue opportunities as they arise.” For WBP, that means creating employment because, says Ryan, “through employment, [WBP] changes lives.”

Identity is an organization’s clear and coherent purpose and its realization internally as a set of aligned operational and cultural practices and externally in exceptional communications.

Growth Capital is enterprise-level funding or investment that builds the capacity for business expansion and strategic planning.