Growth Capital is enterprise-level funding or investment that builds the capacity for business expansion and strategic planning. Growth Capital provides social enterprises with the space for deep reflection before tackling the next step in their plan to scale.

Growth Capital comes in many different forms, but at its root it is an influx of unrestricted funding that provides both time and tailored support to an organization when it is most needed. As with business venture capital, distinctive types of support are needed at different phases of growth. An investment of capital at the right time can provide the foundation for expansion to a new site, help an organization grow from a personal project into a multi-million dollar enterprise, or save an organization from going under. There are three distinct phases and types of growth and growth capital:

A goal for many social enterprises is self-sustainability—they want to support themselves with no outside funding. This provides the freedom to make bold decisions, but also requires a reserve to fall back on if necessary, or to use to tackle new projects and growth.

There is a particular kind of long-term, unrestricted, pioneering investment that has been a crucial enabler of enterprise expansion. While every enterprise approaches expansion and scale differently, this provision of capital for operations, often paired with strategic planning requirements, allows each organization to build as it sees fit. Much of this capital comes as a multi-year grant or investment, usually for three to five years at a time. The diversity of each organization’s individual approach to growth capital can be seen in the table below. 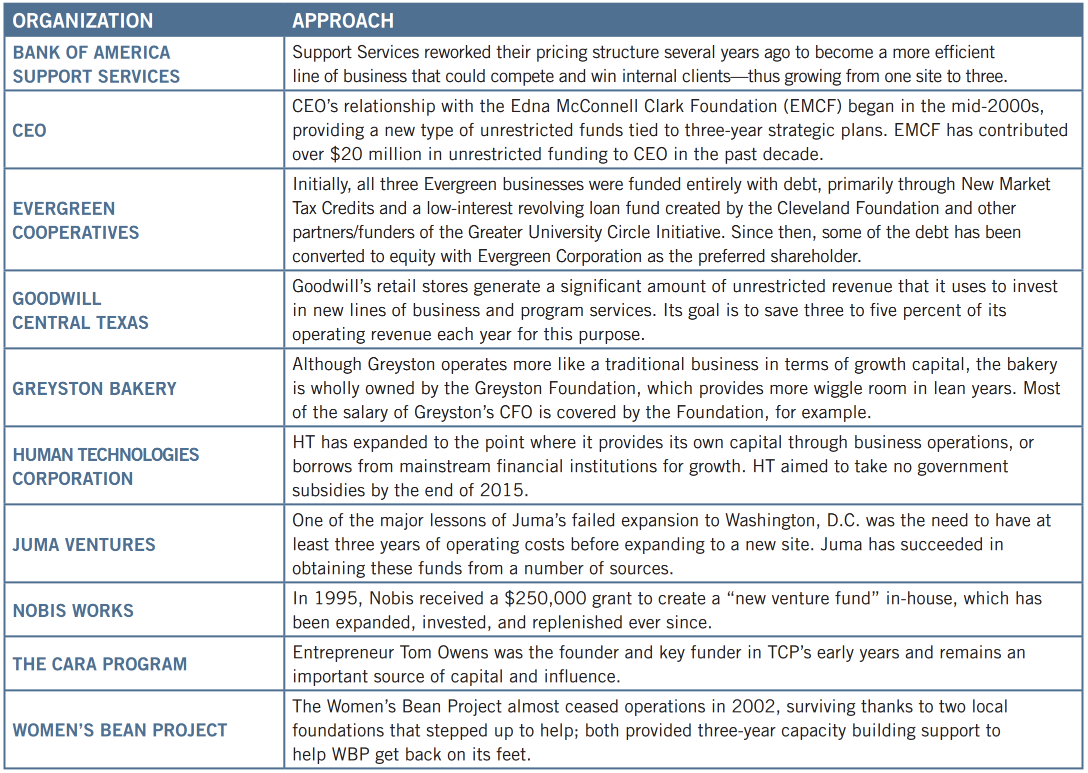 There are no rules for funding in the early stages of a social enterprise. Growth capital is often difficult to acquire and part of a scramble for any type of funding that can be secured. Capital is often provided by family, friends, and small, local funders, consistent with the individual needs and opportunities for enterprises at this stage.

The Women’s Bean Project (WBP) was funded in large part by the founder and her friends and family in the early years, and focused more on social justice than on the business in its own right. The focus on social justice came to a head in 2002. Without business controls in place, WBP was confronted with having insufficient funds to meet payroll. Two local foundations were instrumental in keeping WBP afloat in 2002 by providing three-year capacity building grants that allowed for business planning and were accompanied by technical support. Tamra Ryan was brought in as CEO in 2003, and the influx of growth capital provided Ryan, and WBP, with the breathing room to figure out what was needed to help the organization move into a stabilizing and growth phase.

Few organizations are lucky enough to have a founder and major funder still involved after nearly 25 years—the Cara Program (TCP) in Chicago is one of them. Tom Owens founded TCP in 1991 and, after a five-year incubation period, decided it was time to run it like a business. He provided $400,000 in seed capital and hired TCP’s first CEO. Owens is still a major funder of TCP, but the first influx of capital he provided gave TCP the foundation it needed to grow into the rigorous life skills training and transitional jobs program it is today. The challenge with this type of funder/founder relationship is to ensure diversity in funding streams as the enterprise grows and scales.

Government funding often plays an important part in the early stages of an enterprise’s development, but many case study subjects found the restrictions and requirements that come with government funding to be an extra burden. A distinction must be made between government grant funding and government contracts for service. Government contracts provide the revenue backbone for many of the social enterprises profiled for this report, and provide a constant stream of work for employees. Women’s Bean Project CEO Tamra Ryan explains: “we never want to be dependent on government dollars such that, if they go away, we are in jeopardy.” This concern in accepting government money was echoed by many of the CEOs interviewed for Impact to Last. At HT, the leadership team set a goal of no longer accepting New York State funding by the end of 2015.

At the growth stage, long-term, general operating capital is ideal and partnership with a private, institutional funder can be catalytic. National foundations are often the providers of large, multi-year grants at the growth stage, which are typically accompanied by technical assistance, including business and strategic planning, and meetings with grantee cohorts to share lessons and experiences.

At Juma Ventures in San Francisco, the executive team found funders to support program services, and the business revenue helped support most—and some cases all—of the costs of providing employment to participants. With a solid early foundation, Juma was able to replicate its model in other locations: Oakland and San Diego. Through early replication, Juma learned a number of lessons—most importantly, the importance of upfront growth capital that could provide at least three years of operating costs, and partnerships with local service providers.

In 2003 the Center for Employment Opportunities (CEO) in New York was awarded its first long-term, unrestricted funding by the Edna McConnell Clark Foundation (EMCF). The three-year grant helped CEO plan its first set of site expansions, and CEO is now in its third round of funding and business planning with EMCF. While the money is technically grant funding, both EMCF and CEO refer to the $20 million provided in the last decade as investment capital. The growth capital is provided without restriction, but only on the condition that CEO plans for and achieves strategic milestones. As EMCF staff explains, providing this type of capital means “more programs, more evidence, more youth served.”

During the later stage of development, some social enterprises become their own engine for growth capital—using revenue and reserves to achieve sustainability and scale. At this point, enterprises have grown past foundation and government funding for the most part and rely on strong and successful business models to continue to employ their target population and grow into new locations and new lines of business and move forward strategically.

Several social enterprises profiled in Impact to Last have grown to a stage where capital for expansion is typically not provided from the outside, but is generated internally. These organizations—HT and Goodwill—build revenue reserves through mature and predictable lines of business that support continuous innovation. At Nobis Works in Georgia, the CEO created a “new venture fund” several years ago with help from a large local foundation and has replenished the fund with revenue, reserves, and additional philanthropic support in order to maintain the important source of growth capital.

1. Intentionality and thoughtfulness are crucial in the search for growth capital. Different types of capital come with differing requirements and rules, so an enterprise should be strategic about seeking out and using infusions of growth capital. Both planning for and understanding the purpose of the capital will help to identify the appropriate funding source, strategically use it once acquired, and track progress toward enterprise goals. An explicit focus should be placed on planning for and securing growth capital as a strategic imperative, helping an enterprise grow sustainably.

2. Diversification of capital sources is difficult in early stages, but necessary for sustainable growth. Especially in the growth phase, many organizations rely on one large funder. In looking to the future, all social enterprises should have multiple sources of growth capital, including from philanthropy, traditional financial institutions, and business income. An enterprise reliant on one or two large funders is beholden to the requirements that accompany that funding. Diversification of capital sources allows an enterprise space for new, creative thinking, and the opportunity to plan for the future without worrying about what might happen if the main funding source was to be lost. Diversification is an important financial metric for a social enterprise—and a tool for building not only a fundraising strategy, but also developing business lines.

Evidence is the practice of exceptional performance measurement and management, transparent reporting of financial and social indicators, and conducting rigorous evaluations of impact.