REDF is dedicated to using data and evidence to improve its practice and the field of social enterprise. Our measurement and evaluation work includes tracking of social enterprise employees over time and other efforts that capture development of non-profit capacity and other key indicators. REDF’s Social Impact Report 2010 reports on one aspect of this work, highlighting key findings based on data collected by BTW informing change from 1163 individuals employed in social enterprises between 1998 and 2008. These individuals were interviewed when hired into a social enterprise and then tracked for up to 24 months after hire; the methodology section of this report provides further details on this process. 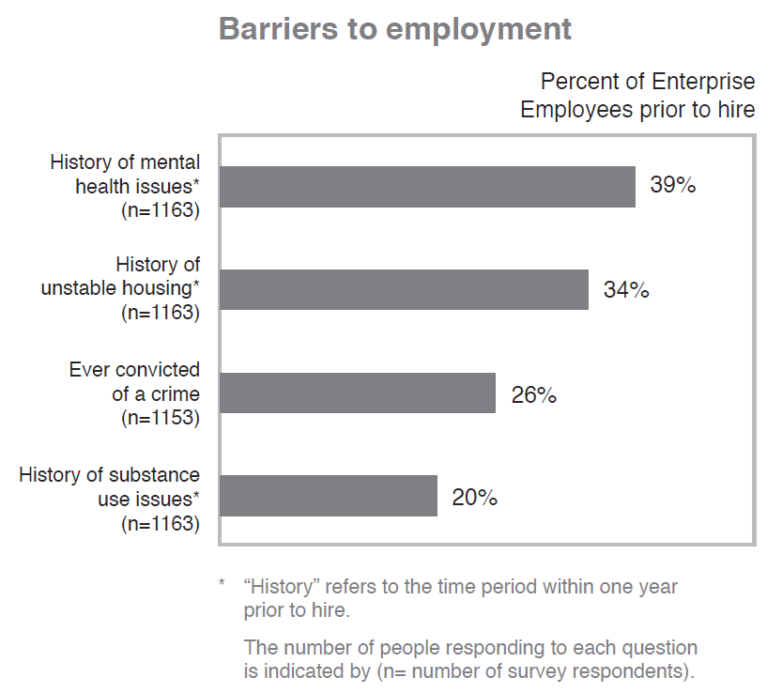 Social enterprise employees hired between 1998 and 2008 faced numerous barriers to employment. Nearly 40% had a recent history of mental health issues, while more than a third had a history of unstable housing (34%), and 1 out of 4 had a criminal conviction (26%).

How much are social enterprise employees working? 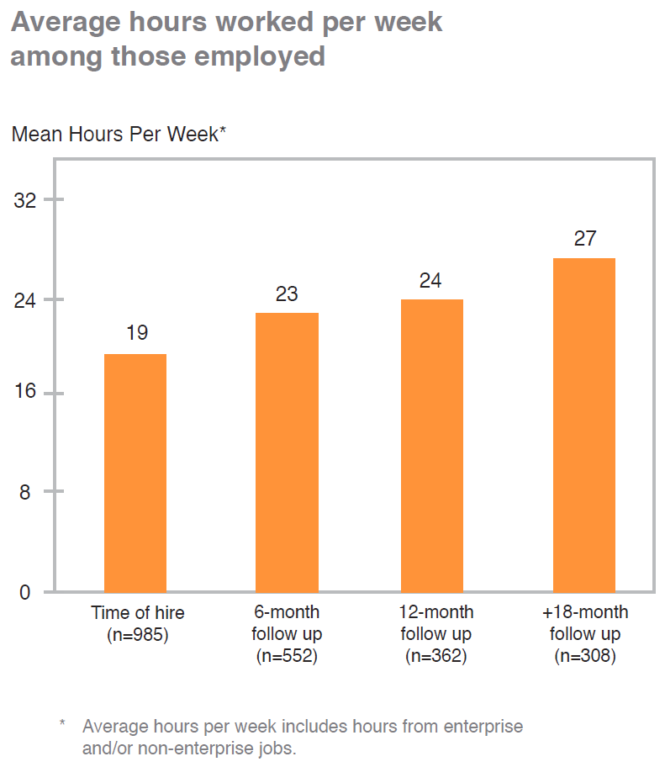 The number of hours worked per week in REDF social enterprise jobs was similar to those found in a wide array of transitional jobs programs, in which paid work experience is combined with receipt of social services and other program elements. A recent review of transitional jobs programs reports paid work experience ranged from 20-32 hours per week for people who face a range of barriers, including people receiving Transitional Aid for Needy Families (TANF) and people on parole.6

Hours worked per week on average began at 50% time, or 19 hours per week. Weekly hours increased over time but remained under full time, averaging 27 hours per week at 18-24 months after hire. Many social enterprises begin by hiring people on-call or part-time, and increase hours over time. In some cases, accommodation of disabilities or other factors means a full-time job may never become the goal. In other cases, working less than full-time may be temporary goal given mandatory parole, or as an accommodation for health challenges. However, for some people hours worked may have been less than employees were willing to work due to shifts available. REDF is continuing to work with its portfolio organizations to match hours worked with each social employee’s needs.

Most social enterprise employees earn close to local minimum wage when hired. For those who remain employed, hourly wages increase nearly 1/3 over the next 18-24 months. Hours worked also increases over time, resulting in significantly higher income from employment. 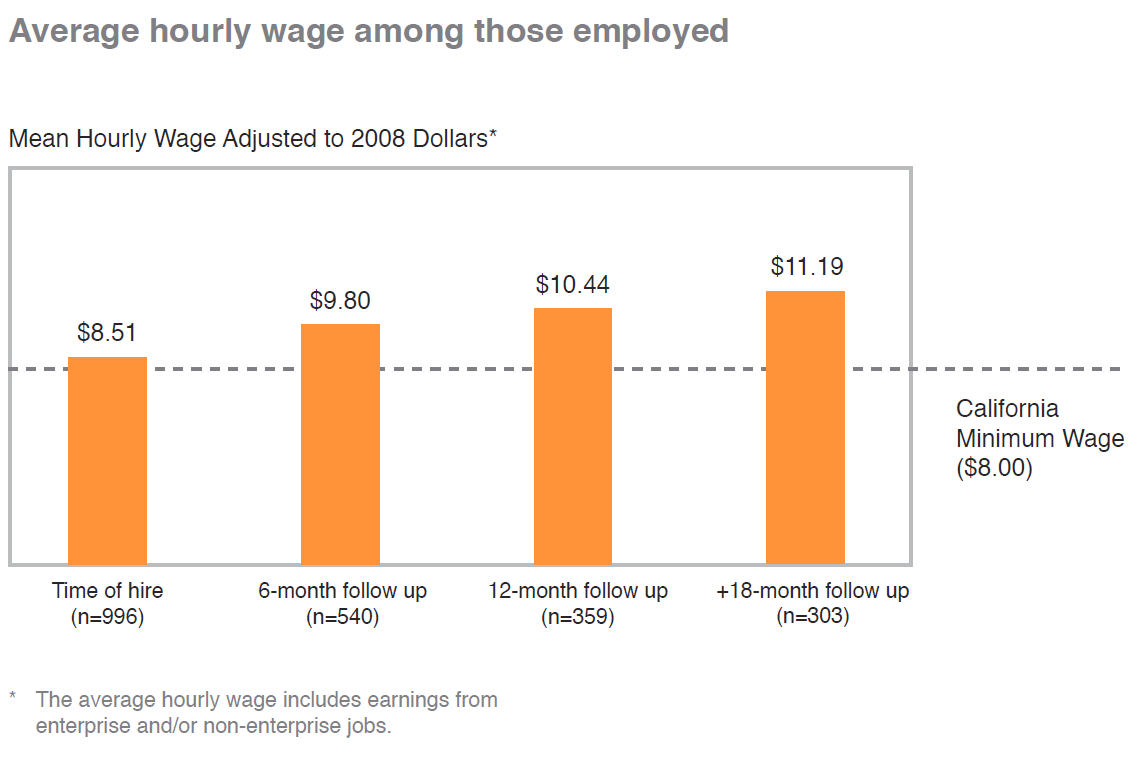 Face-to-face survey interviews were conducted with social enterprise employees at time of hire and up to two years after hire between 1998 and 2008. The majority of interviews were conducted by BTW informing change staff. Roughly 1/3 of all employees hired in REDF social enterprise between 1998-2006 participated in baseline interviews. There was significant loss to follow up over time (approximately 50% of those who participated in baseline interviews were not interviewed at 18-24 months). Challenges finding people over time is not unusual with a population having an experience of homelessness and/or instability, and this loss limits the interpretation of results, in particular as those lost to follow up may be different from those participating in follow up interviews. Analysis was conducted to compare the characteristics at time of hire between those interviewed at 18-24 months after hire and those who were not able to be found for interviews. Those lost to follow up were more likely to have unstable housing or histories of homelessness at baseline. All data were self-reported survey responses.

BTW and REDF produced several products over the years based on these data, including a series of Social Impact Reports in 2005 and 2006. In 2009, extensive analysis was conducted by BTW with input from REDF based on all social enterprise employee interview data collected from 1998 – 2008. Analysis was conducted in two ways: using a cohort approach, which included all data available at all time points, and a panel approach, using data from the subset of employees interviewed at all time points. This document, written by REDF based on BTW data, presents data from both analyses, identifying the type of analysis as relevant.

Lessons Learned and Next Steps

REDF has been helping create and support social enterprise for over a decade. We have learned a lot about how to help non-profits create and run enterprises dedicated to creating jobs for people who face serious barriers to employment. The data reported here demonstrates that many people who might be seen as impossible to employ are actually both willing and able to work. Jobs in REDF portfolio social enterprises have provided a path to higher wages and continuing employment. Beyond increased income and stability, many social enterprise employees report that working allows them to contribute to and be a part of the broader society.

An overview of the different ways a social enterprise can choose to measure its impact.

This purpose of this tool is to share some key studies that have been done to increase the evidence base for the employment social enterprise field. This resource will be kept up-to-date with new research and findings as they are published.

A study of economic self-sufficiency and life stability one year after starting a social enterprise job.