We know that retention supports are important, but what strategies are most effective? MDRC is a renowned research firm focused on building knowledge to improve social policy, with an emphasis on promoting income mobility and well-being. This article summarizes some key research and strategies on employee retention originally shared by Richard Hendra from MDRC for REDF’s webinar.

What we know about employee retention

Time and again, the data on employment dynamics shows that the risk of job loss is highest soon after someone finds work. Taking a national sample of welfare-to-work participants, MDRC has graphed an “employment survival curve” which shows us how long people stay in work after they’ve found work. 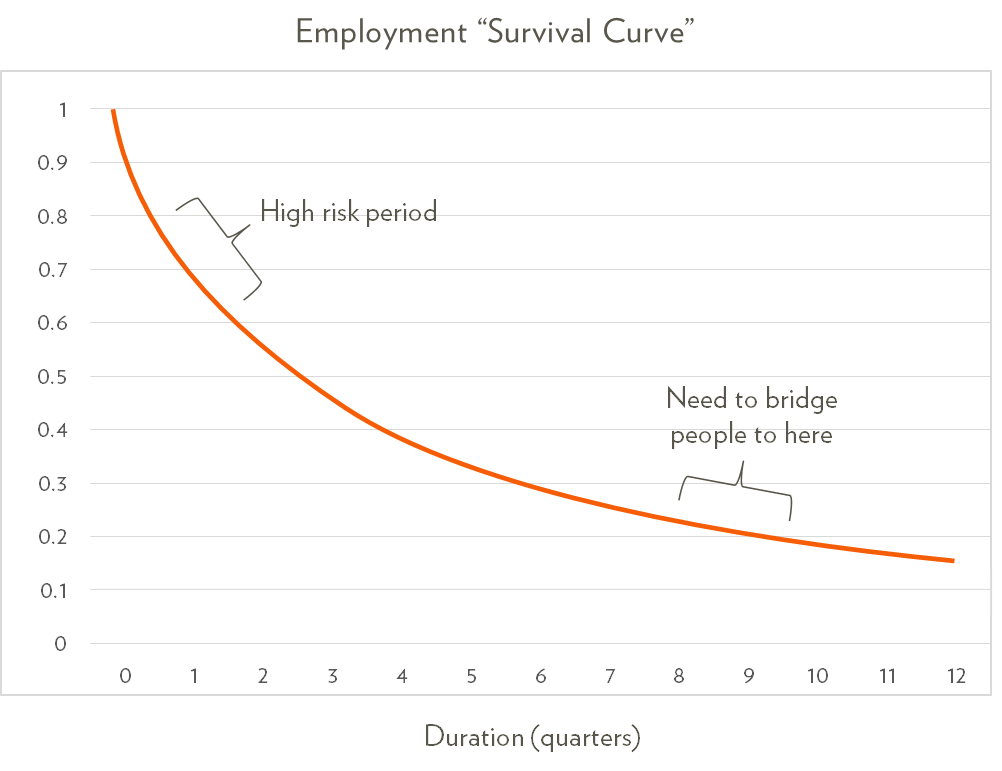 We can see that the curve is very steep early on. After only one quarter of employment, 20% of the sample had lost their job. After two quarters, 30% had. And after a year, half of the participants are no longer in work. This shows that the transition point from subsidized to unsubsidized employment is a very high risk time. After someone transitions into the unsubsidized labor market, and is in an open and competitive environment, is when we see higher rates of job losses and when they’ll need the most support. This is the high risk period that we have to focus on.

However, the converse is also true: the longer someone stays in work, the less likely it is they’ll lose work. So the key is to bridge people to that year to year-and-a-half period out, where they’ll be stably employed and much less likely to lose their job.

In the 1990s, there was a lot of excitement about the “work-first” strategy – the idea that once you get someone into a job, the positive returns of work experience would take care of the rest. By the late 1990s, however, we began to see that people were getting stuck in a low-pay/no-pay cycle; they’d go in and out of work, or they’d get stuck with low wages. As a result, the government sponsored a series of studies, one of which was a very large one called the Employment Retention Advancement Study that took place throughout the US. The goal was to focus on not just getting people into work, but on the much more difficult problem of getting people to retain and advance in work. 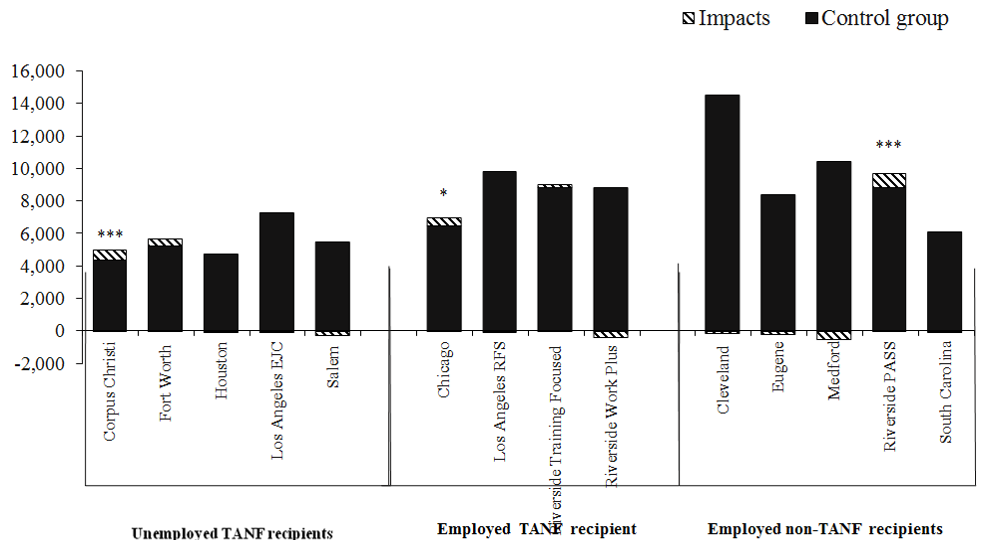 This chart shows the earnings levels at 12 different programs that were run across the country. The black sections of the bars shows the earnings of the control group: these are individuals who did not participate in a program. The striped section of the bar shows the value added by participation in a program. As you can see, for many of the programs there was no real effect on retention or advancement. This demonstrates how difficult the problem of retention can be, and that it’s much easier to place someone into a job than it is to help them stay there.

On the other hand, three programs showed promise and gave us some good ideas to work on as models for the future:

In the ERA, and several other studies MDRC has done, the coaching and the counseling was found to be very generic, and as a result people will often stop engaging with it because they don’t see the value in the services. To be effective, the service should lead to very concrete steps, such as a specific training opportunity or a specific job opening.

For example, the program in Chicago in the ERA study provided information about specific jobs in downtown Chicago that participants qualified for, but did not know existed. So it initially tried to solve an information problem. However, the program also found that individuals were wary commuting from their neighborhoods to downtown Chicago for work, so the program worked to give them the confidence and to show them the benefits doing so. In particular, the program emphasized the benefits of formal jobs in the labor market that attached workers to the Earned Income Tax Credit and other benefits.

So the focus should be on positive opportunities. While barrier assessment and removal are important services, MDRC has found that a lot of programs get stuck on this phase and participants never get passed it. Instead, they recommend a strength-based, proactive strategy: looking for individuals to find better opportunities and to advocate for themselves. They often found that low-wage workers are very reluctant to ask for raises or for better working conditions, and that effective programs that that have produced impacts have focused on that kind of self-advocacy. Ultimately, a new job is sometimes the best means of advancement and that sometimes its best to change job proactively in order to get an earnings increase as a low-wage worker.

As mentioned earlier, low wages are associated with job cycling – going in and out of the labor market. Wage supplements address that issue head-on by effectively increasing the take home pay, at least early on during the transition back into work. Among other benefits, wage supplements provide a cushion for some of the work-related expenses that come up – a car repair, for example, or work-based expenses such as uniform or equipment purchases. Additionally, these supplements are effective in part because of their immediacy; the EITC may be a year away, so it allows the worker to see the benefits of work early on.

Through this research, MDRC has learned how to best set up wage supplement programs. One important finding is to keep them simple and not to complicate things or have too many different supplements. It’s also important to frame them in a positive way – the terms “supplement” or “stipends” are most appropriate; avoid the term “incentive” as it might imply a lack of motivation on behalf of the worker.

MDRC has also looked at the amount of the incentives. A program they studied in Texas provided $200 per month for the first year, conditional of full time employment. 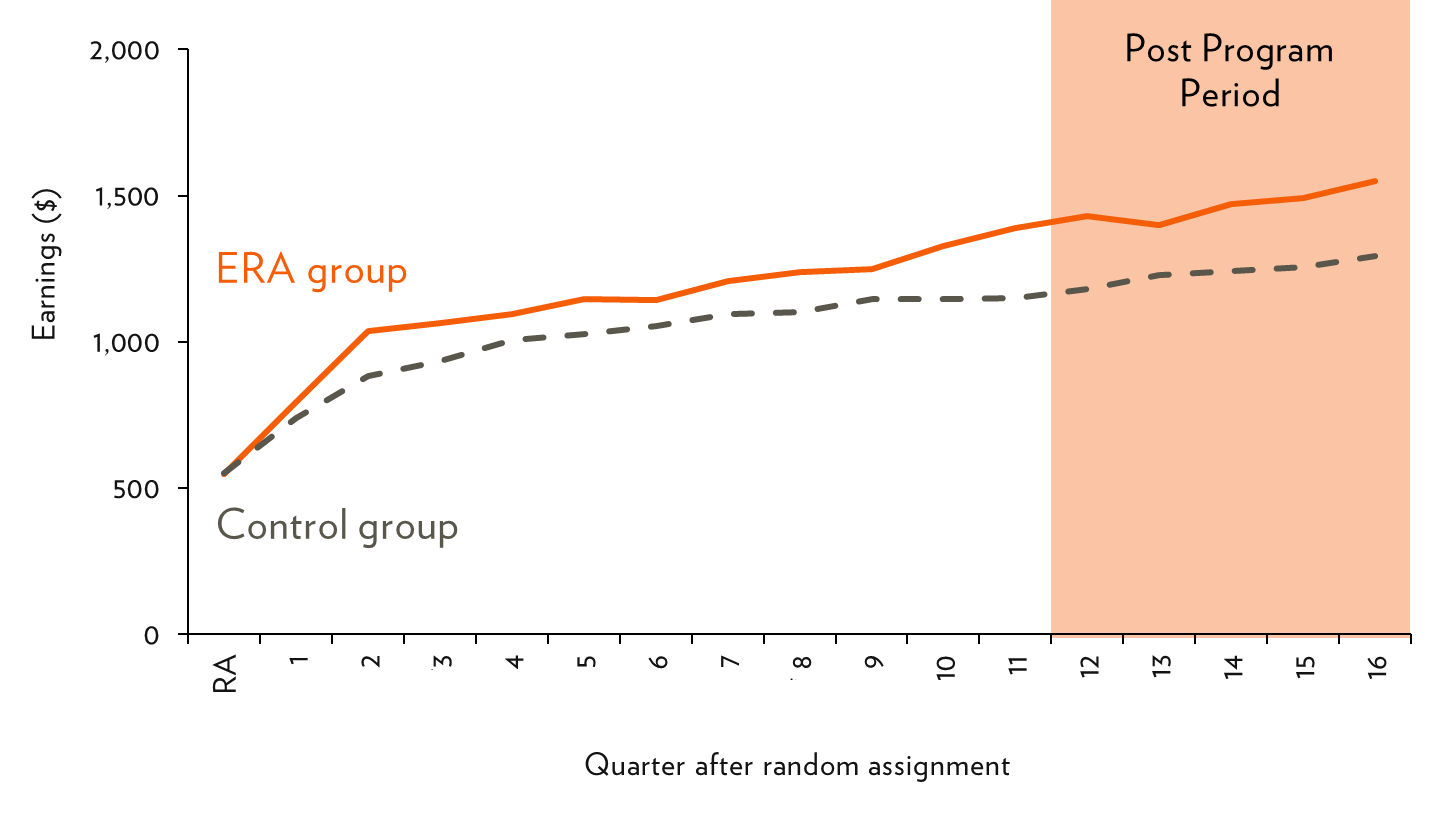 While this resulted in some modest impacts on employment, what was particularly interesting was that the effects could still be seen after the incentive period had ended. Four years out, well past the incentive period, there were ongoing and even growing impacts on earnings. Likely it was the combination of really good post-employment services plus these wage supplements that led to this long-term effect.

The flip side to the benefits of longevity of employment is that the converse is also true: the longer someone is out of the labor market, the less likely it is they’ll return to it. As a response to this, the idea of “rapid reemployment” means thinking of job development not as a one-shot deal, but instead as something that is achieved through secondary and tertiary placements. For the unstably employed, the first placement is often just the beginning. Therefore, the most effective providers are poised to re-place people quickly if job loss occurs. If not done quickly, the person may get the “scarring” effects of long term unemployment that happens when people have been out of the labor market for a long time. This is a unfortunately common phenomenon that we’ve seen a great deal since the Great Recession. These secondary or tertiary placements can also be used as an opportunity to find better jobs.

Most employment programs do a really good job at the beginning of learning about their participants, often having their participants draw out career maps or career advancement plans. Unfortunately, too often are those plans sitting in the file drawer unused. They provide a really great opportunity to engage people and to understand their goals and their barriers, so you’re not starting from scratch everytime there’s a new issue coming up. They allow you to maintain a really good background on that individual and to customize services and coaching to their needs, goals, and barriers. In order to do so effectively, having an open channel of communication is critical. Many of the issues that come up are very easy to remedy, the problem is the provider doesn’t know about them or they find out too late. So an open channel of communication cannot be overemphasized. Employers value it because it helps reduce turnover, and individuals will value it because it helps them get ahead of an event before it leads to job loss.

Thirty years of studies have highlighted limits of the “work first” theory that once you get someone into a job and that the positive returns of work experience would take care of the rest. Instead, we’ve learned the importance of employee supports, especially in the vulnerable transition period from structured, subsidized employment into the open job market. Some key takeaway points are:

Retention is top of mind for employers and service practitioners. What are the biggest challenges for social enterprises and their employees?

Hot Chicken Takeover, a community restaurant in Columbus, shares their approach to employee recruitment and retention, and shares some best practices and lessons learned along the way.

We offer free resources, tools and connections that can help you grow your social enterprise.